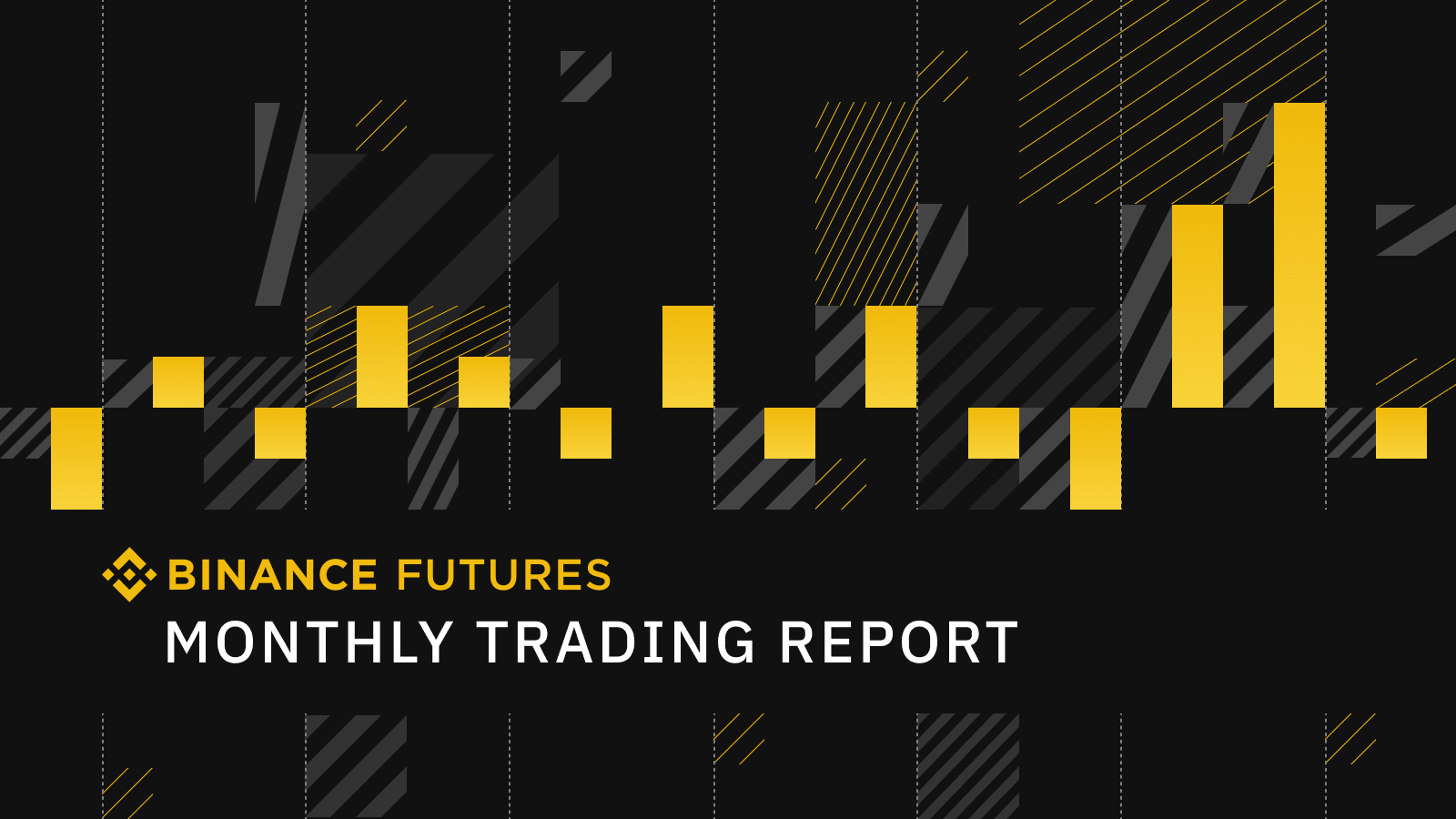 January was a record-breaking month that showed the widening adoption of digital assets. Cryptocurrencies continued to thrive — extending the impressive bull-run that started in October 2020. The buoyant market has pushed the crypto-economy to a new milestone as market valuation crossed $1 trillion for the first time.

For Bitcoin, January was a historic month in which price and network activity soared to new heights. According to Glassnode, the Bitcoin network registered over 22.3 million unique addresses actively sending or receiving BTC throughout the month (refer to chart below). The crypto market data aggregator also noted that January had seen the highest monthly number of unique active addresses in Bitcoin's history. The surge in Bitcoin's on-chain activity coincided with growing interest from institutional investors such as Square, MassMutual, SkyBridge Capital, and well-respected investors, including Paul Tudor Jones, Raoul Pal, and Elon Musk. All of whom have publicly endorsed Bitcoin as a reliable store of value. 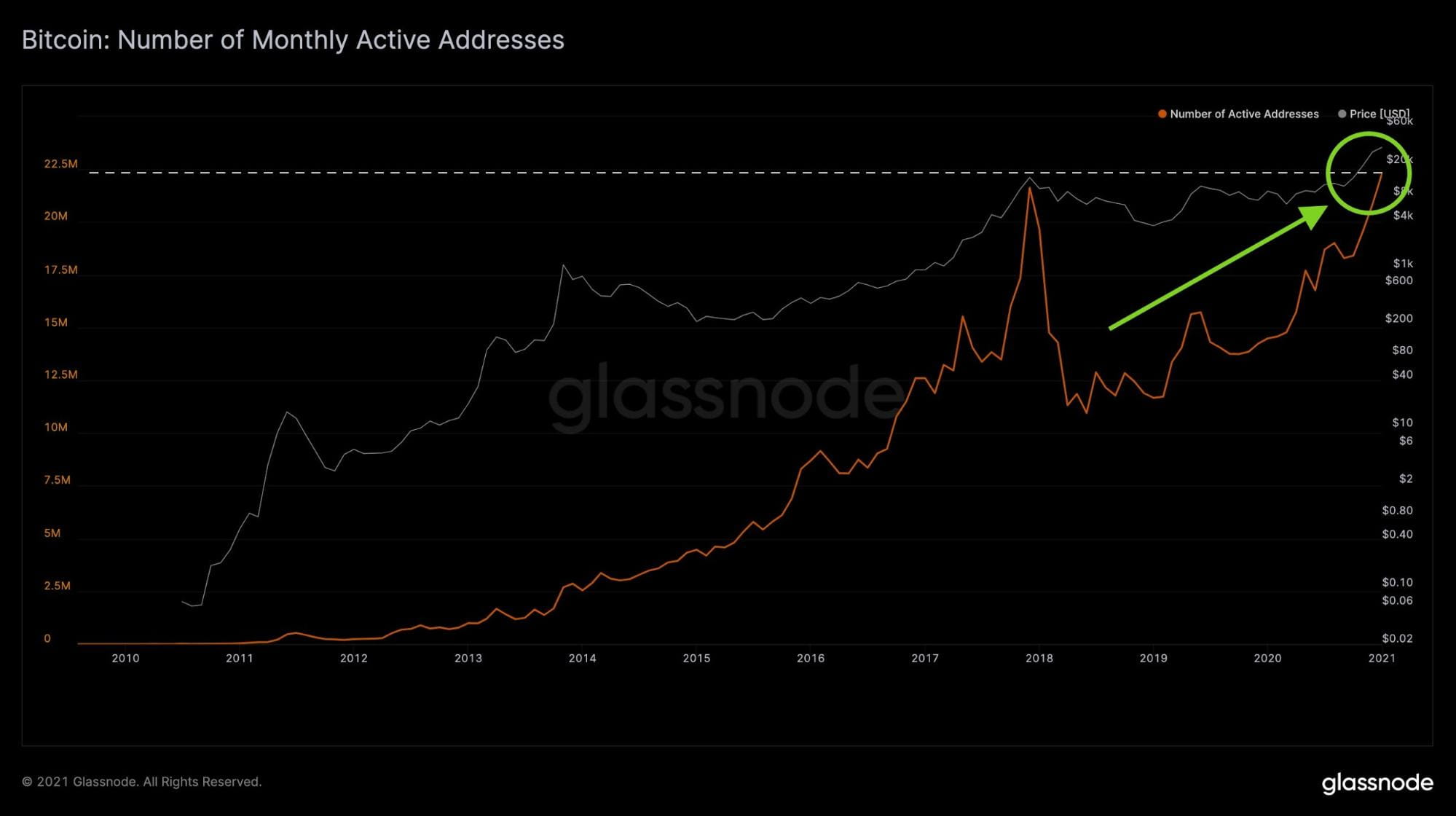 Consequently, trade volumes spiked to record levels last month. On Binance Futures, Bitcoin futures contracts generated over $650 billion in volume - a monstrous leap from the $296 billion in December 2020. Following a relentless rally from $20,000, Bitcoin eventually peaked at $41,950 on January 8th. Since then, the bellwether cryptocurrency slid into consolidation after a 30% pullback that saw prices fall to as low as $28,850 on Binance.

In the last two weeks, Bitcoin staged a comeback on two occasions driven by social media frenzy. Tech billionaire, Elon Musk, has been an influential voice on cryptocurrencies, particularly Bitcoin. The Tesla CEO changed his Twitter biography and inserted "#bitcoin", causing a viral reaction among crypto traders on Twitter. Recently, he also stated his view about how Bitcoin is on the verge of mass adoption. Without surprise, traders reacted positively to his public views causing price spikes on two occasions.

Ethereum, the world's second-largest digital asset by market capitalization, also had an incredible month as prices registered a new all-time high of $1475 on January 25th. Ethereum remained resilient despite Bitcoin's slump as decentralized finance (DeFi) resurgence boosted ETH prices. Many DeFi tokens, including Aave, UniSwap, SushiSwap, and Maker, produced phenomenal gains in January. The Total Value Locked (TVL) in the DeFi economy expanded over 42% in January, from under $20 billion to over $27 billion.

Ethereum on-chain metrics (chart above) continue to display a bullish picture, validating ETH's recent breakout. According to CryptoQuant, an on-chain analysis platform, ETH's supply on exchanges had dropped significantly in the last two weeks, falling from 22.33 million to 20.8 million coins. This means only 18.1% of the Ethereum supply is currently circulating on the exchanges.

Another significant market mover is the native token of Polkadot’s network, DOT. Polkadot is quickly becoming a popular alternative to Ethereum for decentralized finance (DeFi) investment purposes. At the time of writing, over 127 projects are currently building on the network. The DOT token gained over 170% in market value in January, pushing the token to fourth place in market capitalization.

Another worthy mention is BNB, the native asset of Binance’s ecosystem. In January, the exchange token registered a new all-time high, crossing the $50 milestone for the first time. BNB is currently the 9th largest cryptocurrency by market capitalization. The token has produced considerable gains of over 40% for holders since the start of the year.

The month of January ended with a buying frenzy fuelled by Reddit-inspired retail traders. In a textbook ‘pump and dump’ scheme, the price of a meme-based cryptocurrency, Dogecoin, soared over 1000% at its peak, recording one of the market's biggest moves of the month. DOGE had been a prime target of a coordinated buying attack, inspired by GameStop's saga of how the Reddit retail trading crowd ran over Wall Street pros. Traders from the infamous Reddit forum, WallStreetBets, turned their attention towards the crypto market last month, looking to replicate similar movements. DOGE's furious surge temporarily catapulted the digital asset into the top 10 cryptocurrencies by market capitalization as its market value swelled to over $9 billion, according to data from CoinMarketCap.

As the entire crypto-economy surged to new heights, trading volume on derivatives exchanges moved in a similar tempo and cadence. Binance Futures maintained its market leadership as the #1 venue for Bitcoin and Altcoin futures. In January, Binance Futures processed over $1.1 trillion in volume and shattered a new daily volume record with over $76 billion on January 11th. Open interest on Binance ended the month with $4.1 billion, expanding 46% from $2.8 billion.

Rising prices, coupled with rising open interest, may indicate that new money is flowing into the market (reflecting new positions). This could be a sign of bullish sentiment if long positions are fueling the increase in open interest.

Bitcoin’s volume dominance on Binance Futures held steady in the range of 50-60% despite the significant pullback in price. In the final two weeks of January, volume shifted to altcoin contracts driven by a coordinated pump in several prominent altcoins such as DOGE and XRP. We observed a similar trend in Bitcoin’s open interest dominance. Altcoin contracts have driven most of the open interest growth towards the end of January, suggesting that traders are bargain-hunting for undervalued Altcoins.

Can Bitcoin Continue Its Record-Breaking Run In 2021?

Bitcoin's on-chain metrics have turned increasingly bullish in recent weeks as demand continues to exceed supply. For example, big-money investors such as Grayscale Investment Trust and MicroStrategy have been accumulating Bitcoin, even at current levels. Further, the number of Bitcoin whales – institutions or individuals with large holdings of Bitcoin (over $10 million in value) – has increased significantly in the last two weeks to 6,690 addresses. The count has increased by over 1,100 during the recent price consolidation, indicating that more demand from big-money investors.

Meanwhile, the number of Bitcoins held on exchange addresses continues to slide, further reducing the market's sell-side liquidity. The amount of BTC stored on exchanges started declining sharply since April 2020 — at the height of the Covid-19 pandemic and global economic recession. This downward supply trend has reached a 2.5 year low as the balance of bitcoin held across all exchanges fell to just over 2.36 million on Wednesday, according to Glassnode. Given this situation, Bitcoin might face a potential supply crunch should big-money investors continue to hoard the leading cryptocurrency.

From a technical perspective, Bitcoin has broken out of a descending triangle pattern, defying the bearish outlook forecasted by many technical analysts. BTC price has broken a crucial supply barrier around $35,000. If buying pressure continues rising, it is not hard to imagine Bitcoin extending its bull-run beyond $40,000.

Combined with a large liquidity crunch currently seen on crypto exchanges, increasing demand, and the eminent breakout above $40,000, it may be time for another bitcoin rally soon.